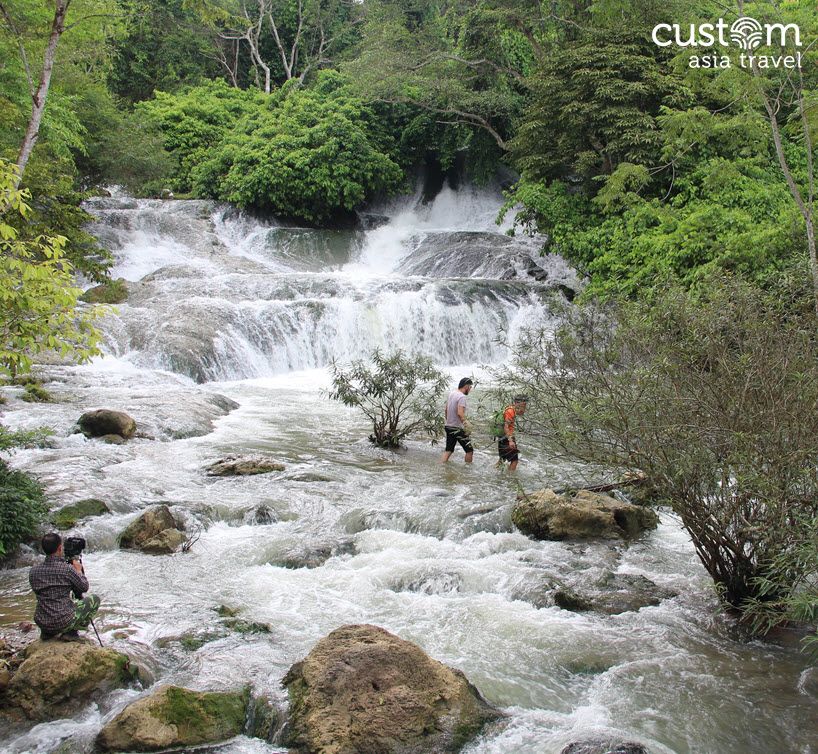 The falls are in full flow 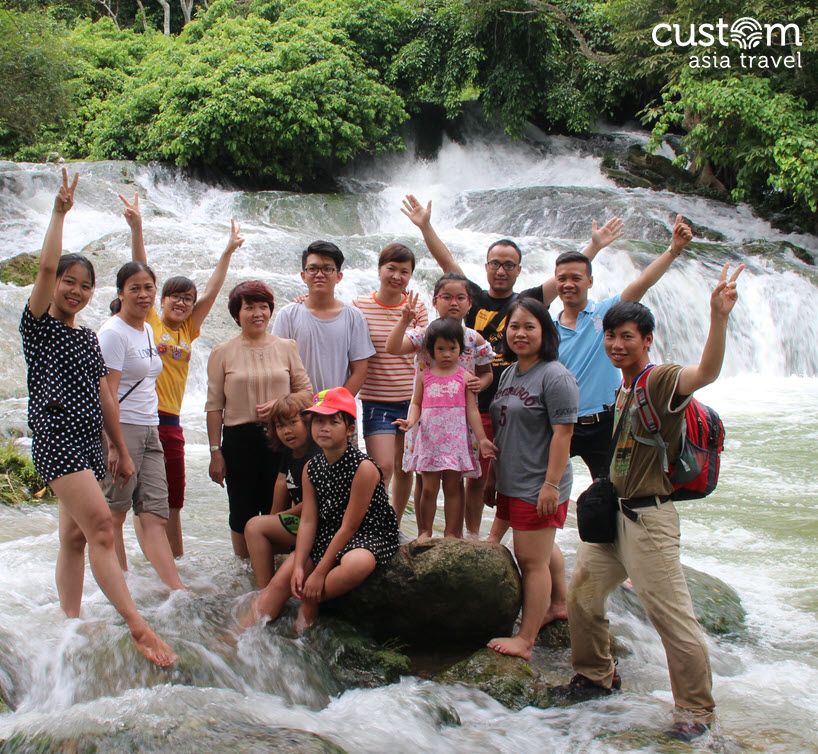 If you fall in love with travelling, you can’t miss Bac Son’s attraction in Lang Son, Vietnam. With mountain, waterfall, cave, landscape, you will be charmed in their beauty. In this article, travellers are going to discover the beauty of Dang Mo waterfall.

The Dang Mo Waterfall is far 90km from Lang Son city. It is located on 279 National roads, is on the way from Binh Gia district – Lang Son province to Na Ri district – Bac Can province. It is on the border of three communes in Binh Gia districts such as Mong An, Thien Thuat and Hoang Van Thu. Dang Mo waterfall is also called Mui Bo Waterfall (Cow’s nose). It starts from 2 streams on upstream fall down in the same direction and then enters into the fall. It is estimated about hundred meters high waterfall, flowed from the three-story stone.

Around Dang Mo waterfall is still quite wild, only a few houses were built up by rudimentary people, mainly to keep cars. Sometimes they sell some local products, so the tourists can prepare foods, drinks before visiting the waterfall. Along the waterfall banks, large and small stones are covered by green mossy like a carpet of the green tree. Ancient trees have branches overshadowed the middle of the waterfall. Especially, the water of the waterfalls is a combination of groundwater in the rolling mountains of rocky arc in Bac Son. If it is not in heavy rains or in floods, Dang Mo waterfall is so gentle, with medium sloping and depth. You will be immersed in the fresh and cool water with the bird sound, roaring waterfalls and mountain scenery. This is a majestic destination but not a lot of people know about it. It is only explored by people who really love travelling. Along the waterfall bank, large and small rocks are covered by green moss piling up on each other, like a backdrop of green trees. The scene here suddenly reminds me of Nguyen Trai's verse: "... Ta nghe nhu tieng dan cam ben tai… Ta ngoi tren da nhu ngoi dem em” (I hear the sound of a violin beside the ear ... I sit on the rock like sitting in a soft cushion ...).

On the banks of the river, the ancient trees’ canopies reach out to the centre of the waterfall. In the middle of the water, there are some green trees come out. All of them make the waterfall becomes a great and mystery natural picture. The forest beside Dang Mo waterfall even more surprised with the range of green trees, some flowers looming inside. In season changing time, the plants seem likely dressed on new clothes, unique and colourful. If you just glance at it, you may think that you are lost in Europe forest. After heavy rain, the rainbow crosses the sky, lights shine on water make Dang Mo waterfall more fanciful. I believe your heart will be touched with such a beautifully natural picture like that. Come to this place you will forget all the stress, tired feeling and hard journey, only one thing you can feel is indescribable happiness like being lost in heaven. Dang Mo waterfall will attract you from first sight. With the poetic beauty and the unique advantages, Dang Mo waterfall is evidently becoming an attractive picnic spot, not only for the people around the area but also for the visitors from another place. Especially on extremely days in summer or the weekend, you can easy to catch the images of families or groups of young people playing, sightseeing, shooting, fishing, camping...

On of Mu Cang Chai’s attraction is Tu Le Commune - famous for glutinous rice, where you can soak up the hot spring and see the peaceful...

Mo waterfall is located between Na Hang A peak and Na Hang B peak in the territory of Mo De commune (Mu Cang Chai district)...